Make sure your yogurt says "Greek." Mix ingredients for marinade and put in large bowl or large ziplock bag with chicken thighs and let marinate for at least 3-4 hours in refrigerator. I prefer to start the marinade the night before and grill it the following afternoon. Chicken can be cooked on grill or in skillet, but it's much better on the grill.

Make sure to squeeze most of the water out of the cucumbers or else your sauce will be watery. ~~I usually put the grated cucumbers between some paper towels and squeeze. It's a mess. I'm open to suggestions for a non-messy way to squeeze the water out. I'd also prefer to not use so many paper towels.~~ Put the grated cucumber in some cheesecloth or another thin cloth and squeeze out as much water as you can. Mix all ingredients in food processor. Add salt to taste. Put tzatziki in the refrigerator for a couple hours to chill before use.

Makes 4-6 gyros (depending on how much chicken per gyro you use)
Slice the chicken into thin strips. Or dice it. Do what you like; I'm not your boss. Add chicken to pita bread. Top with fresh tomato, onion and your tzatziki sauce.You might have leftover tzatziki sauce. You can use it to dip veggies in or you can give some to a friend. You could also market it and make a fortune and split your profits with me. Enjoy! 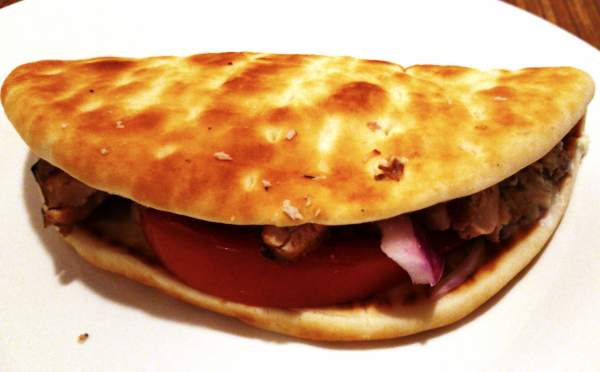